We are distributors of the Spanish manufacturer ‘Esbelt’ which specializes in manufacturing of conveyer belts, flat belts, profiles (bars), polyurethane belts and leading belts for all sectors of industry.  Our experience, high level of organization of production, respect and engagement towards the customers give us the chance to offer the best price/quality ratio.
We are striving to cover all requirements of the market of conveyer belts and we achieve this thanks to a wide range of production. The belts are divided into nine series. Every series includes standard belts, 104 types, which are in stock at all times, as well as special belts which are custom made or have special features. 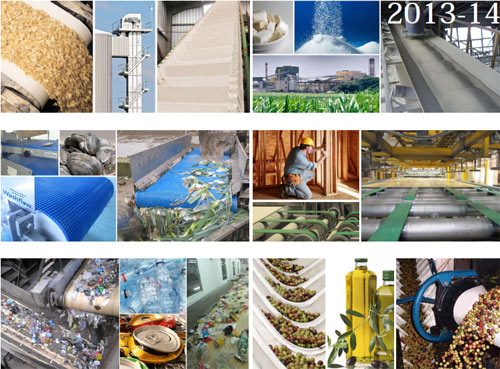 For the food industry the belts can be made of PVC, polyurethane, polyolefin, polyester and silicone. The products which need to be transported determine the material of the working surface of the belts. In the food industry belts from the following series are used: ‘CLINA’, ‘ESPOT’, ‘VERNA’ and ‘POLER’. We offer a wide range of belts for the production of bread, croissants, cookies, biscuits and other products part of the bakery manufacture. There are also belts for rolling out, molding and transporting dough. Such a belt as CLINA 10 FF is accepted as the best belt in Europe for the process of molding and transporting biscuits and biscuit dough. Endless wool felt belts of the series TUBUL specially manufactured for the bread production. These belts are made endless with no links, they don’t have stitching. They are a perfect solution in bread production, made 100 % out of natural wool. The thickness of these belts is 3 mm, 3.5 mm and 6 mm.

For the tobacco industry ‘Esbelt’ offers special belts from the series POLER and VERNA. These belts have polyolefin, polyester, polyurethane or silicon coating. The belts from these series are non- toxic and they have perfect resistance towards oils, animal and vegetable fats. Depending on the surface the belt can be smooth or embossed with different types of cuts. These belts stand the temperature testing perfectly (an analysis of burning at temperature of 810 degrees proves that the belts don’t contain halogens or nitrogen). Main consumers of these belts made by ‘Esbelt’ are the biggest international companies such as Philip Morris in Germany, Spain, Czech Republic, USA, Belgium, Rothmans Germany in England, Spain and many others.

For the wood- processing industry ‘Esbelt’ offers special conveyer belts and flat belts. These are belts with PVC or polyurethane coating with a low friction coefficient and antistatic. Belts with coating or without one can be manufactured endless or with prepared ends.

For the printing and publishing industry ‘Esbelt’ manufactures special conveyer belts and flat belts. These are belts with PVC or polyurethane coating with a low friction coefficient and antistatic. Belts with coating or without one which are used in the feeding, folding, sorting, etc. machines can be manufactured endless or with prepared ends.

For the engineering industry ‘Esbelt’ offers special conveyer belts and flat belts. These are conveyer belts made of PVC, belts with and without coating which are used in heavy engineering industry production process in the car building and glass- making industry. The belts from the DRAGO series have excellent resistance to braking, wearing out, abrasion as well as oil resistance. The belts from KERAM series – their excellent resistance to cuts makes these belts perfect for metal stamping products and transport of products with sharp edges. The belts can be manufactured endless or with prepared ends.

For airports – Nowadays the luggage processing at airports requires complex electronic, mechanical and computer- made managing systems. The conveyer belts are an important part in this process. ‘Esbelt’ is a company with a long experience in this field and has worked with many airports around the world for 20 years. For the airport complexes ‘Esbelt’ manufactures special belts. These belts have polyolefin, polyurethane or PVC coating. Depending on the type of their surface the belts can be smooth or embossed with different cuts. The belts from the FEBOR series can be both with a surface with low friction coefficient (for collecting transporters) and with high adhesion (for inclining transporters).  The special belts from the ASTER series with embossed surface are perfect for different transporters for luggage and loads moving. Main customers of ‘Esbelt’ are the biggest international airports Madrid, Barcelona, Valencia, Malaga, Ibiza, Palma de Majorca (Spain), Bombay, Calcutta (India), Dubai (United Arab Emirates), Munich, Dusseldorf (Germany), Cairo (Egypt), Glasgow (Great Britain), Ho Chi Min (Vietnam), Jakarta (Indonesia), Manila (Philippines), Melbourne (Australia), Antalya (Turkey), Rio de Janeiro (Brazil), Paris, Toulouse (France), Tel Aviv (Israel) and many others.

Esbelt can offer you belts for many different applications, all you have to do is contact us and explain what you need and we will do our best to help you.

Technical features of the conveyer belts and belts, you can find on the Esbelt website.

PVC belts with embossed surface specially created for inclining surfaces. Most of them are two- layered, hard and antistatic. They have good abrasive resistance. The main applications are in the food industry and packaging machinery, moving luggage at airports, packaged and loose goods /restricted and non restricted/.

Green PVC and PU belts with smooth surface suitable for application where mineral oils resistance is necessary.
All of them have hard structure, on the bottom they can have simple or impregnated base. Most of them are antistatic and resistant to cuts, the PU belts are suitable for food industry machinery. They have very wide application.

Belts with PVC, PU or polyester coating on top, non toxic and resistant to animal and vegetable oils, and juices.
The main colour of this series is white, but they can also be in blue or natural colour. There are hard and also flexible belts.

These are PVC belts in green colour with similar composition to the BREDA series. The difference is that these are flexible, coated on both sides, antistatic, abrasive resistant; they are also resistant to cuts and mineral oils and grease.
They are suitable for transporting big masses of loose materials in horizontal position /with buckets/, for application in the heavy industry.

PVC belts in white similar to CLINA belts. They are coated on both sides, flexible, with high load- carrying capacity. All of them are antistatic, flexible and resistant to animal and vegetable oils. Specially designed for transporting food products, with horizontal and vertical applications.

PVC belts for elementary applications where no special requirements exist. Most of them are antistatic, moderately fire resistant, coated on both sides, smooth or embossed. They are suitable for different applications.

Thick two- layered belts made of hard PVC and PU, the upper layer is made of fabric resistant to cuts.
They are designed to be shock resistant, resistant to cuts, wearing out and mineral oils and grease.
Metal sheets can be stamped or cut directly on top of the belts.